Its that time of year for me again. Restocking the school supplies. Last year i did splurge a bit and bought a box of pens and pencils plus erasers and sharpeners plus folders and wallets. This year however i only had to spend less than a tenner and buy just these.. 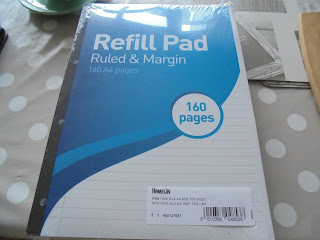 Pack of 5 pads. These will last until next year.

The Government give no help to Home Schoolers which is fair enough as its my choice to do this.

I do however think they should provide stationary to pupils. Its expensive and some parents can't afford food and Uniforms let alone all the stuff the children have to have.

It was thankfully no big outlay for us this year. Can't say the same for some parents though.