Hello everyone, i hope that you are all well and enjoying the nice sunshine today.

It seems we are in for it tomorrow with the weather. I had to double peg laundry last week to keep it on the line.

I had letters back from the Home School Inspectors and all is good..i have now removed the post as it was primarily for them.

I had a haircut..my first since January..my hair was really getting on my nerves. I looked liked i had been ragged around a hedge then dragged backwards and that was just the start. It was curling and i had this feeling something was always on my neck..yep it was my hair. So i asked my husband to give me a number 8..its about an inch or just over. Wow what a relief ..i have a cute almost pixie cut now. I have gone from one extreme to the other..and my parents never even noticed😕.

I have started selling on Ebay again. I am going to do 2-3 items at a time and see how it goes. I cleared out my Cushion Cover stash and they sold..i also sold the Candlewick double bedspread as well. I don't use them and they were all just sat in the airing cupboard taking up space. As soon as they are delivered and all is ok then i will pop 2 more items on.

I did a big shop online at Morrison's..i was annoyed as i had an item missing again..and its fine for them to say check it as it arrives but have you ever done that. I had the delivery man huffing and puffing..saying we were his last but one drop and he was off home. Trying to remember everything you bought is hard when you feel rushed. I emailed them a month ago to say an item was missing then..i got no reply at all. This time i emailed again and told them they owed me £5 for both missing items and i wasn't happy at all. I wasn't rude just to the point and voila i got a £5 refund. So i am happy about that.  £5 may not be alot to some folks but to us it is. Hubby's wages are 80% then next month it goes down to 60%..so we have to make very penny count. There maybe no job after September so now is our time to make quick adjustments to our finances and budget. So yes £5 matters.

I made Home made baked doughnuts and croissants. 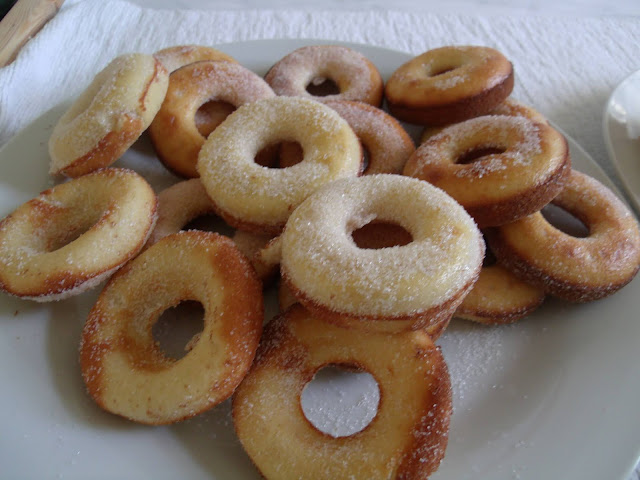 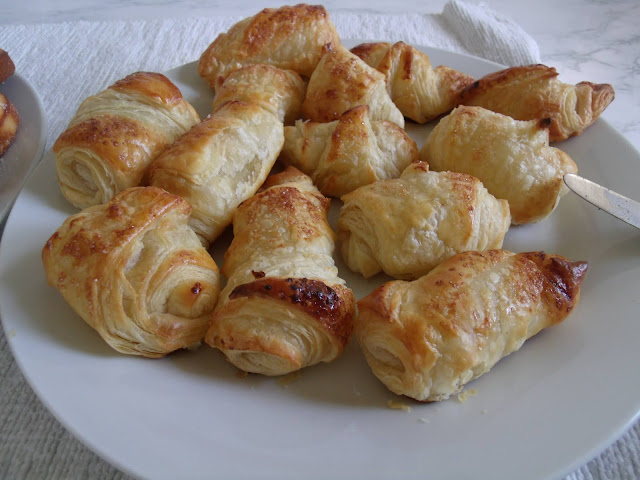 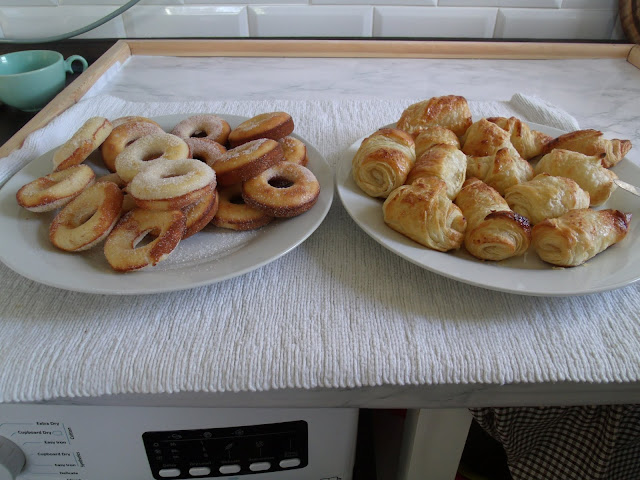 The croissants are just Puff Pastry rolled into crescentish shapes..Iris loves them and that's all that matters.

The doughnuts ..well i wasn't keen on them but then i really think i over baked them..next time i am going to reduce the time from 15 minutes to 10..i keep forgetting i have a beast of an oven now that keeps the heat in and not warm the kitchen around it. Everyone else loved them. I made 18 and they had all gone the next day so they must have been good.

I harvested Tomatoes and cooked them down ..i froze them ready for Chutney or Relish when i make it.

The fellas went to the allotments and brought home Cabbages, Beans, Beetroots and a Courgette.

All the produce has been bottled or frozen and our chest freezer is now full of veggies and fruits.

Our son and Fern have some African Land Snails..which are bloody huge and they keep laying eggs so they need feeding, the Courgettes come in handy for them, they love them. As pets go they are easily the better ones. No mess and in a tank.. Goldfish are better.

I have been moving things around again..mainly plants and little bits. Freeing up space by getting rid of stuff i no longer need or use.

I have bought some books..one for myself and one for Fern..which we are both devouring as they are so good.

We have been going for walks in the afternoons. Which is nice as we talk about all sorts of things.

I have been watching Netflix..a series called Stranger..its Korean and o so brilliant. I am now on season 2 and totally hooked.
So that is what we have been up to. Saving money and making do with what we have.
How are you doing?
take care all
ftm