Catch up with life and craft..

Hello all,how are you?
Its been a while and i have lots to catch up with.
Firstly i had an Xray on my arm and nothing is broken ..its more likely muscles or ligaments that are damaged...i have some gel to rub on to ease the pain.It throbs and is uncomfortable but on the mend.
We are slowly doing the kitchen..the tiles are up..new boards around the bottom of the kitchen and they have been painted white..the ceiling and doors have been painted..we put new pipe work in under the sink and sorted out the old copper pipe that went outside..we have new plug sockets and new light switches.We have the paper and paint ready and the new flooring arrived yesterday so its all go.It just seems a long time..but we have completely gutted the whole room..no cupboards only the sink and a tiny bit of worktop..its also the hub of family life..the kitchen is the one room you need all the time so we have to work around meals.
We celebrated Iris's birthday with gifts and a cake..she was so happy with all her presents..and spent some birthday money on clothes for her Reborn baby doll who is called Robin..from a distance she looks real but when you get closer you can see she isn't..Iris has wanted one of these dolls all year and she was estactic to unwrap her.
The allotments are almost done for the year..we have had some delicious cabbages..no smell when cooking them either..i chopped up,blanched and then separated it to freeze it ..i didn't want a big frozen clump of cabbage..i had trays for days of cabbage freezing ..totally worth the extra effort..all i do now is put my hand in the bag and just take what i need.We are hoping to get the polytunnel up next year..the chairman of the committee is retiring and moving away..he is the one who put the brakes on anyone having a polytunnel or a large greenhouse..yet he had 2 greenhouses put together end to end..unfair but hopefully we will get someone who understands the need to grow more food and have a bit more about them and move with the times.
I have had a lovely visitor as well..didn't actually spot him until he moved. 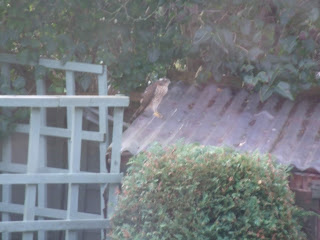 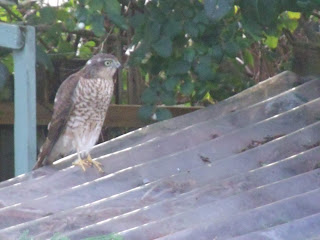 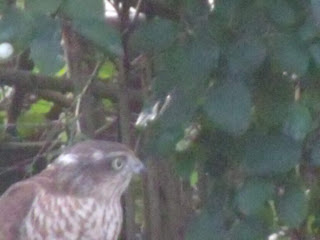 I admit i got a bit snap happy with the camera..so i will only put a few of the hundred or so i took. 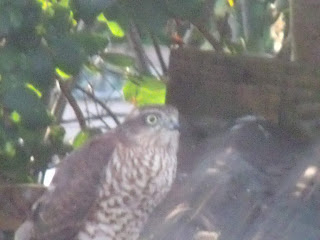 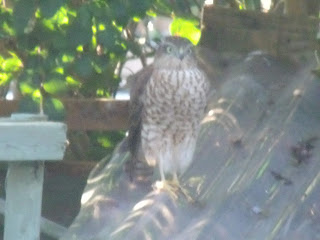 Absolutely beautiful and sat there for 30 minutes or more..then poof he was gone.We are so lucky to be able to see all these wonderful creatures that have come to our garden this year.

We are also prepping for christmas..yes i know its early but its better to be ready than not..we have our turkey nestled in the bottom of the freezer and i have started a food box..we buy a few luxury things every week and put them in the box for us to have a treat.So far we have gorgeous biscuits and chocolates.

The girls and i have been busy crafting and making use of the little bits we have in my neverending craft box. 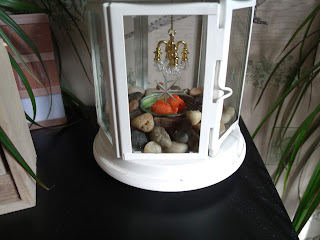 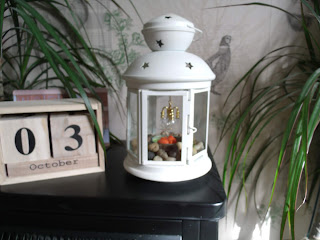 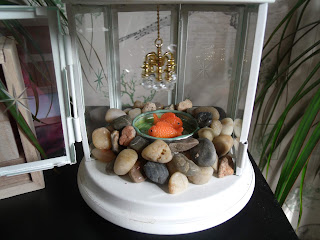 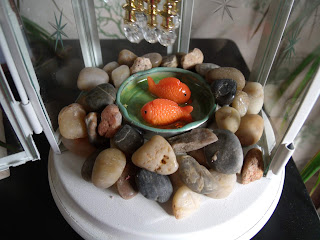 We changed our lantern to a little rock garden with a pond and fish..i hung the chandelier with blu tack in the end..the pond is a bottle top painted a bluey green with clear nail varnish poured in to make it shiny and look like a pond..the pebbles are from the garden..the fish i already had and the chandelier was 99p..it looks gorgeous on my little fire.
Jack dog was watching me and trying to get my attention..so he was climbing all over me then jumped on the sofa and did a doughnut..funny little fella..but he won't stay still long enough for a picture.. 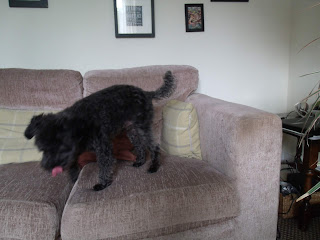 We have also converted 2 old cigar boxes..they were being used a crayon boxes..so went to work. 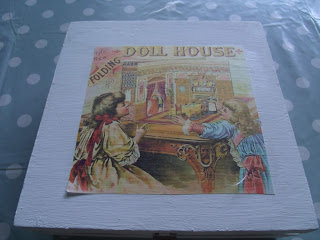 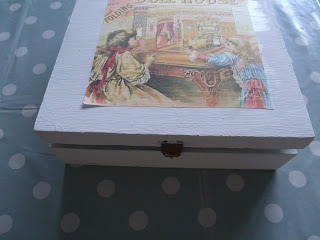 When you open it up ..its a surprise.. 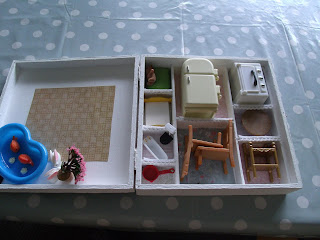 Everything a little one could need to play.. 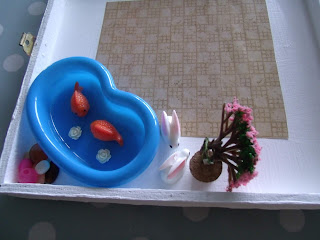 A little pond and rabbits these are all glued into place and cannot be moved..choking hazard. 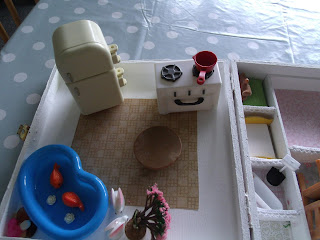 Most of the furniture can be removed and placed where you want.. 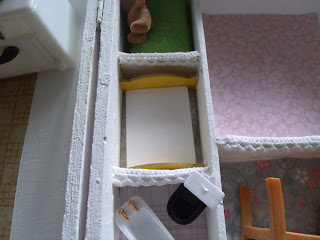 The bed can't be removed as it was tricky to do so i glued it in place in the box ,also the bathroom bits are glued in. 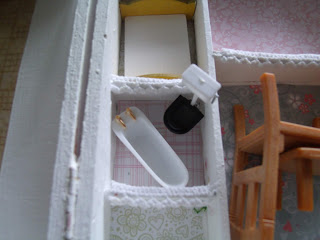 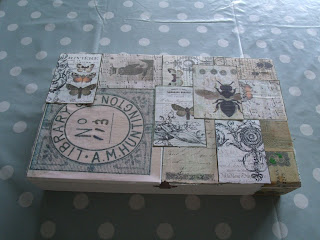 We decoupaged another cigar box and made it into this.. 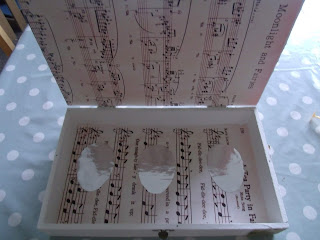 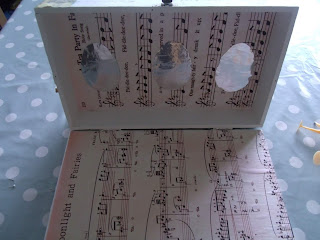 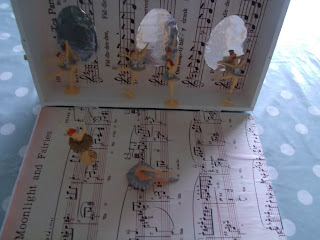 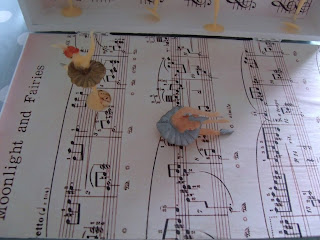 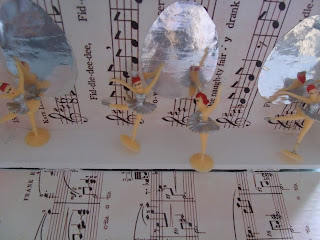 All ready to dance and be played with..

I have also made myself a little moss terrarium..just moss from the garden and some compost.I popped a little bench and tree inside. 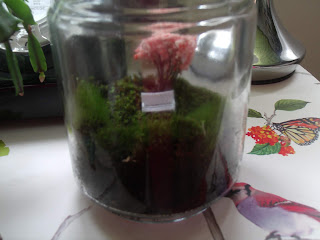 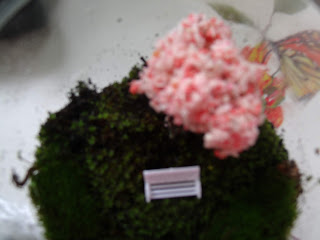 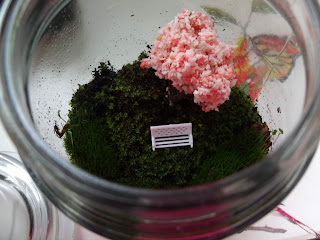 I used a candle jar with a lid..i haven't opened it for about a month now and its going well.
So ladies what have you all been up to?
ftm