Fish ain't what they used to be..

Hello all,how are you?
The weather is atrocious..nothing but rain and wind.It could be worse.I hope none of you got flooded.
Well as my title says fish really are not what they used to be..
I had a goldfish for 10 years,i won him from the fair when we first got married..Henry was his name.He was my mate..i would chat to him in the night when i got up to feed babies and even though he never answered it was nice to do it..weird i know.
Always there until one morning he wasn't..poor chap.
After that i have had various goldfish from pet shops..the fish police interrogating me on the size of my bowl or tank..air pumps,food allsorts..i understand they care about the welfare of the fish but even though i have all the correct stuff my fish has died.If you have ever tried to take one dead fish back to show them then you will be blamed for it..you must have done something wrong not the fact that the fish was diseased or ill when you bought it and they pass the blame back to you.
I gave up..until now..the no fuss fish is brilliant.I told you i had plans for something bigger than in a jar.I spent yesterday making this.. 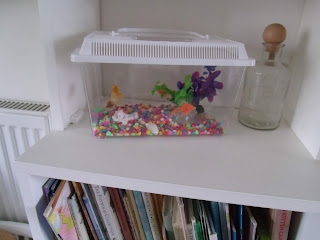 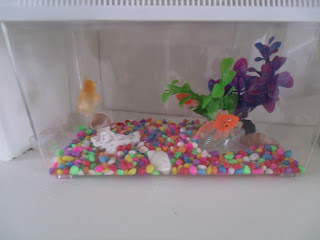 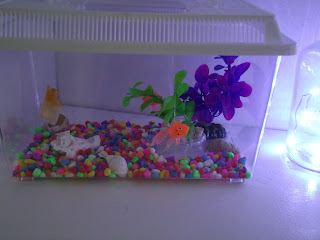 On first glance it looks real until the fish don't move..at least these ones won't die on me.
ftm