There is a moron and then a total moron

Hello all,how are you today?
Well i for one am so glad we are all still here..apparently the world was coming to an end yesterday.I saw no sign in the sky and never even saw the mysterious planet that was going to coming crashing down to earth and wipe us out.
This has to be a total fail..all the conspiracy theorists this morning are probably feeling stupid and all those people that believed this junk and sold their possesions and gave away their money are no doubt feeling let down as well..still there is always another moron waiting in the wings to predict the doom of the world.
The particular moron for this total fail is this man David Meade.. 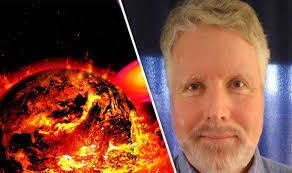 Apparently now he has changed his mind and that people who bought his book(which by the way has left him sitting pretty) misread it..the world is not going to end on the 23rd September but the world as we know it will..convinient to blame it on the reader.Maybe he should have made that particular part clearer..still not to worry he now says that the bible verse and a date that can be found somewhere in Pyramids and i say somewhere..is the date for our end..no one has found this date yet?

This kind of thing gets on my nerves..there are many conspiracy theorists,cult leaders,religious fanatics out there in the world who have no doubt made a huge profit from this..gullible and vulnerable people are persuaded to believe this stuff day  in and day out.Then when it doesn't happen its a long list of reasons why.Mostly the reasons are
1,you are not worthy
2,you still have money left
3,you haven't worshipped me enough yet
4,the aliens gave us one last chance
5,i haven't made enough money from this
6,you got the date wrong
so and so on..never an apology even when its totally obvious its a failure.
I for one do not want the world to end and i think people like this man should be investigated for allowing panic to spread..how much did he make from it i wonder?
Or take him to trading standards and say he failed to deliver on his promise and you want your money back.Thats a joke by the way...
I feel so sorry for the people who actually believed him and his kind..liars,rumour mongers,false prophets and users.
There are certain words i use for people like this ..only they are not family friendly and i wouldn't lower the tone of my blog to publish them.
What do you think folks..do you believe or like me have to actually see it to believe it?
ftm👱