Not had time to think..

Hello all,how are you today?
Well i have been so busy here..the allotments are now in full swing and boy did we have a lot of catching up to do..never again are we going to leave it..we ache in places you shouldn't.But hopefully now we can keep on top of it all.
I have had numerous visitors over the last week or so..firstly the Education Authority to check on the girls progress with Home Schooling..we had to make sure we had finished projects and then set it all out in groups ,each girl had her own section and then joint projects also..we passed Yay..i like the lady that comes she is always so enthusiastic and takes the time to actually look at the work and progress they have made. Its nice to hear that we are doing well.She also has some good ideas and resources too..we always make her welcome and i would rather she comes so i know we are doing ok..it seems some parents are very anti-authority and are quite rude and aggressive..shame as she is only there to help if you need it.
We have had the Council around doing surveys..the first one was on the boiler and radiators..seems they are now obsolete and will need replacing,so they will be coming sometime in July to do this work. Then i had to have an Asbestos survey..i waited all day and he never showed up..when i rang it seems i should have had a phone call to tell me he would not be coming due to delays..so he is coming next week..then i had the company around that services the boilers..he reckons our boiler is a cobbled together one as he has never seen the like of it ever..he did service it even though its being replaced.
Poor hubby had to go for a blood test to check his medication isn't affecting his liver or kidney function..he was told it would be at least a week for any results..so imagine his surprise to get a phone call the next day saying he had to see the doctor..quite worrying really. Anyway he went and was told his Cholesterol has shot back up to 5.4..it was 4.7 last year ,but we both admit the crisps have made a come back just lately so its no more crisps and we are both now on a diet to lose a few pounds/stone and get healthy..we are not getting any younger and still have small children to raise and we want to be around for them and the older ones too. So i am sat here munching on an apple instead of crisps.He is on Statins already but the Doctor advised him to try to get it down himself before upping his pills.

I have upcycled the old yellow chair into a lovely little book chair..hubby thankfully sanded it down in his shed for me..otherwise i would still be doing it..i think he felt sorry for me..standing there sanding it down by hand..he took it away,dismantled it,sanded it,re-assembled it and gave it back to me within hours.. 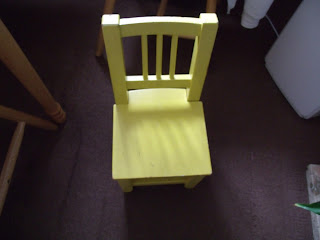 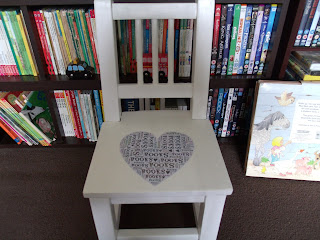 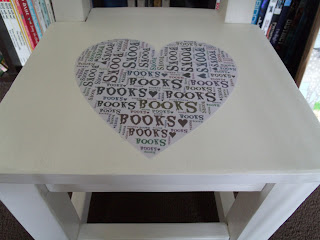 I printed off a Taxegdo and glued it on.. 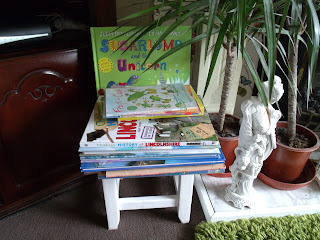 All the Library books go on it..that way i can't lose any or leave any behind. 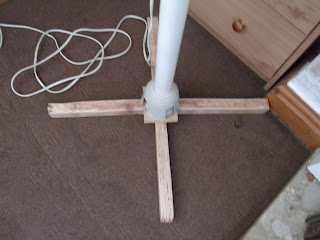 My dad gave us a fan..its a big tall one but the bottom rails were broken and wonky..it was leaning all over..so my very clever hubby took them down the shed and made some new cross rails for the bottom..just made from old pallet wood..but now its stable and doesn't look like its going to fall over everytime its switched on..its been a blessed relief to have one.I will paint them so the match the fan.. 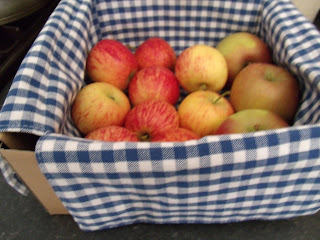 I was looking through my tea-towel cupboard and came across this..an insert for a box..i don't have a box that small so i used it on a box i did have..the girls love it and call it the fruit box..the insert was a gift from my friend..thank you. 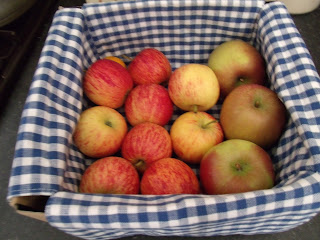 I have been listing on Ebay again and have sold quite a few things.Some people are so impatient..i sold a dress and within hours i got an email asking why i hadn't posted it..crikey ..i did post the next morning but i ain't running out to do it in the rain.
Hasn't the weather been blooming gorgeous..we are hoping it lasts. We have plans to have a BBQ over the weekend and just relax..it feels like the last few weeks have been a whirlwind.
How about you ladies/gents..have you been busy?
flowertotmum
👱